As women in a male dominated sport we have a lot of things things working against us. Lack of other females to train with, different body make up than the men, the occasional social stigma of being a ‘female fighter’ and now another thing that seems to be happening more and more frequently, the possibility of becoming a mother. I am not at all saying becoming a mother is something bad, it is an amazing and miraculous thing. There is a big difference though when a female teammate is expecting and a male teammate is expecting. The male teammates can of course still go to practice and train their butts off. What happens to the females though? sometimes the pregnancy is planned, sometimes it is not, either way it starts to pose a few obstacles when sparring goes from one on one to, two on one.

The first female I remember this happening to was Lindsay. Lindsay and her boyfriend came along to class and jumped in full force. Not long after they started though, Lindsay got pregnant. She gradually stopped coming to class, but ended up with a beautiful baby girl named Mia. Lindsay is back at class and is a hard working blue belt. Her and Ken have worked out a way to where they are both at as many classes as possible and we have even gotten to see little Mia once or twice. She knows how to get mount, and armbar.

Last year one of our blue belts moved back from Wisconsin. Allison is a great competitor and a great girl to have around in class, she was always asking questions and her amazing base made all of us better for having her around. When she left we were all sad to see her go. So when Alison and her boyfriend Aaron moved back we were all happy to see her back. Maybe two months after, Alison pulled us aside and told us she was pregnant. She comfortably trained up to about 4 months before she stopped training bjj. Recently Alison showed back up to practice with baby Aiden in tow. Aiden is about four months old now and he loves to watch practice. he watches on the side, laughing. If anyone is sitting on the side taking a break during sparring we play with the baby while Alison spars. 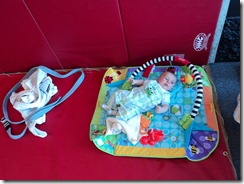 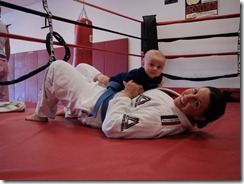 And now Vanessa, our brown belt, is pregnant. She is 5 1/2 months along and still coming to jiu jitsu. When she is there she trains the techniques, and will occasionally spar, but she is unsure how long it is okay for her to keep up what she’s doing. No one really knows the doctors tell her to be careful but they aren’t really sure what Brazilian Jiu Jitsu is, and what she should  or should not do.  So as she is changing weight classes Vanessa keeps training, and planning for her baby girl. 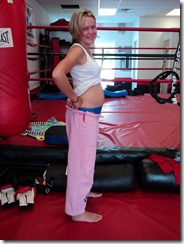 So now the thing we need to do is figure out how much is too much… if there is too much. Or do we just keep training until it becomes too uncomfortable for us? In no way am I condoning doing a tournament 5 months pregnant, I am strictly talking about the training. The hardest thing to do is come back after a layoff, and pregnancy can make for a very long lay off. So if any of your fellow female teammates/ friends that do jiu jitsu get pregnant, encourage them to keep training as long as she feels comfortable, and after the baby encourage them to some in when they can, so #1 we can meet the newest teammate, and #2 see her and get her back on the mats! we have a new generation of jiu jitsu fighters being born by some tough moms, lets make this beneficial to everyone!

A Few Links to check out